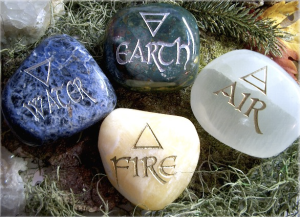 A pre-Socrates magician-philosopher, Empedocles of Acragas (c. 495-435 BCE), is the first to be credited in western civilization with the dogma that everything consisted of combinations of four basic components — fire, water, air, earth — which he called “roots.”  In his writings he also appears to make it clear that he found these roots as more than just material substances, even associating them with the Gods Zeus, Hera, Nestis, and Aidoneus.

Simplifying the physical world to these easily observable and basic functional units was later embraced by other Greek philosophers, to include Aristotle, and the four classical elements became the cornerstone of Western philosophy, science, and medicine for the next two thousand years.  Ancient cultures in Egypt, Babylonia, Japan, Tibet, and India also had similar but different lists.  For example, the Chinese Wu Xing system lists Wood, Fire, Earth, Metal, and Water though these are described more as energies or transitions than as types of material.

Today, science has taught us that there are 118 known elements with 94 naturally occurring on Earth, but many Contemporary Pagans still find value in viewing the world as composed of these four classical elements.

The Elements in Magic

As Empedocles associated the Elements with the Gods, Contemporary Pagans will often view the Elements in more than their symbolic form and instead view them as powers of nature and with it have developed an extensive, and often complex, theology surrounding them.

For example, let us touch on some of the theology surrounding the Element of Fire from a classical Greek perspective.  Empedocles distinguished Fire as the Agent of Action (Kinêtikê) among the Elements.  In Vehicles of the Soul described in Neoplatonic lore and Chaldean Theurgy, Fire is the radiant body, while Earth and Water correspond to the gross body, Air to the spirit body.  The radiant body (augoeides), also known as the astral body (astroeides) or aitherial body, is the vehicle of the Higher Soul, which is responsible for the intellect, including discursive reason, but also for the Rational Will.   In the myths, Prometheus created humans by mixing Earth and Water to create the gross body; and then Athena breathed Air into it and imbued it with a Spirit-Soul. Prometheus added the Higher Soul, which is the Fire that He took from the Wheel of the Sun and brought to humanity in a Narthêx (giant fennel) stalk.  Hippocrates says that the soul is an Immortal Warmth (Athanatos Thermon), which sees, hears and knows everything; most of this Warmth is pushed to the outermost sphere, where it is called Aithêr, and forms a kind of Fiery World Soul.

A more common use of the Elements is in Contemporary Pagan ritual in the form of the Watchtowers.  The concept of the Watchtowers come from Christian Enochian magic, got a makeover by the Golden Dawn, and found their way into Wicca.  The Watchtowers are a tutelary or guardian spirit of one of the four cardinal points or “quarters” (north, east, south, and west) that are used during ritual to help create a boundary for a ceremonial circle or sacred space. They are also variously associated in many traditions with each the four classical elements.  The Watchtowers may be asked to “guard” the boundaries, or they may be invited into the ritual to share their “powers” often related to their correspondences.

The Elements are also commonly associated with various magickal tools or objects.  For example, you may see Air associated with the athame or ritual knife, Fire with a wand, Water with a Chalice, and Earth with a Pentacle though various traditions may use different associations.   In Tarot, they might be relate Swords to Air, Wands to Fire, Cups to Water and Pentacles/Coins to Earth but again, you may find different associations used.

The classical elements, like most broad spiritual concepts, can have many uses and meanings. Try to step back a bit from traditional teachings and cultural norms, even within .  Avoid charts created by others and work to developing your own spiritual understandings.  Create your own lists of properties and correspondences.  Elements are multi-dimensional.  Look at things from a variety of angles. Look for how these magical forces manifest in very simple ways within your own surroundings. Often we draw the boundary between magical and mundane; nature does not.

“…if that which thou seekest thou findest not within thee, thou wilt never find it without thee.” ~ Charge of the Goddess, Doreen Valiente

I am a resident of Kansas City metro area and have practiced Pagan Spirituality since 2007. I am a third-degree Wiccan with the Correllian-Nativist tradition, the local coordinator for Kansas City Pagan Pride Day, and the host of the monthly Kansas Coffee Coven. I currently work full-time in the Computer Industry. I am a retired Army Reserve Lieutenant Colonel and have a Masters Degree in Computer Resource and Information Management. Most importantly I am a proud husband, father, and grandfather.
View all posts by Sam Shryock →
This entry was posted in Uncategorized. Bookmark the permalink.

This site uses Akismet to reduce spam. Learn how your comment data is processed.